Facebook CEO, Mark Zuckerberg, recently revealed the company’s latest quarterly figures and they sure do look impressive. Facebook is confident that they, along with their subsidiaries WhatsApp and Instagram, will continue to dominate the social media sphere in at least the foreseeable future. Zuckerberg, living the brand as always, posted the following status update on his personal Facebook account to highlight some of these impressive figures. Check these out:

Mark Zuckerberg, “We just announced our quarterly earnings and gave an update on our community’s progress.

1.49 billion people are now part of our community.

In 1876, the year the first telephone call was made, around 1.49 billion people were alive.

With each generation, the world is growing closer together. One day our community will connect everyone. Thank you for being a part of our mission and our community.” 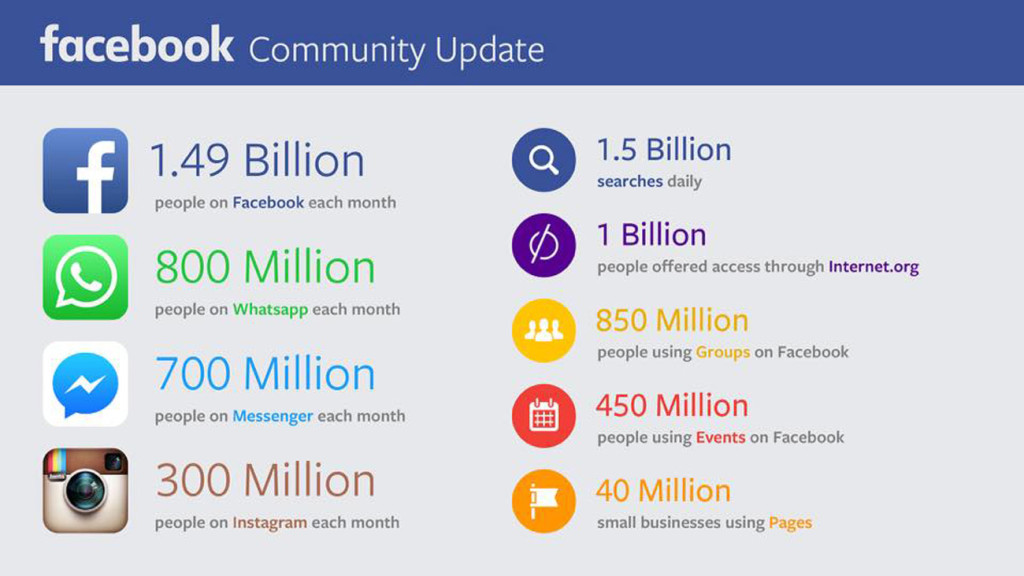 So with Facebook clearly in the lead in terms of users and popularity, what about the social media platform “competing” with them? Let’s do some number crunching to see how they match up and what the social media sphere looks like in 2015 so far…

4. LinkedIn has over 364 million registered members with 13% of online adults stating that they visit the site daily.

Looking for love? The dating app Tinder seems to have all the buzz right now. Here are 3 fun facts about Tinder:

8. On Valentine’s Day Tinder users who logged in experienced a 60% increase in matches.

9. As of April 2015, Tinder users swipe through 1.6 billion Tinder profiles and make more than 26 million matches per day.

10. More than 8 billion matches have been made since Tinder launched in 2012.